When it comes to my video watching habits, I am a total gender stereotype. I like all the romance and family dramas. If I’m watching a crime drama, a comedy or a superhero movie I could directly correlate my interest to how compelling the romantic sub plot is and whether or not there is a woman working really hard to make it in a “man’s world” or subverting the patriarchy with some other narrative. There are exceptions, but it’s definitely the rule. 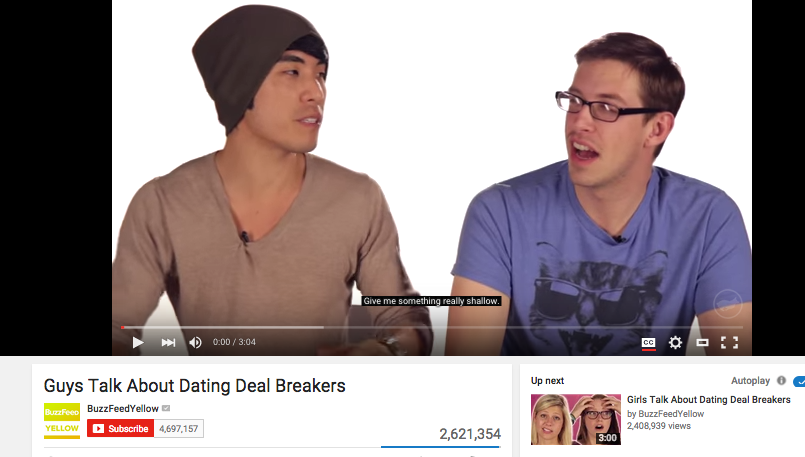 Thus when given the task of making videos dudes want to watch I realize I am at a district disadvantage. I don’t “sport”. I know when to cheer, but I don’t really get why. I enjoy comedy, but I don’t spend hours on youtube watching the next hilarious video, I don’t find people getting injured hilarious, if I see a car accident I turn away.

So I have to find some, I’ve spent some interesting hours on the internet this week, asking male friends for a list of things they like to watch. I’ve watched a lot of comedy, spent too long wondering why broTV has thousands of views when it’s just three guys walking around Walmart. I now have a copy of Duck Dynasty, I have not yet managed to convince myself to watch it.

John also introduced us to an amazing article I would recommend to anyone interested in masculinity: http://www.theatlantic.com/magazine/archive/2015/01/the-bro-whisperer/383506/

So far our hunches aren’t far from where they were when we launched our first Ask A Dude prototype: Comedy helps, a lot. Prominent male figures, or as Bobae would say “Rockstars” are another key ingredient. Lastly appealing to guys’ desire to live up to their own ideals.

Where things are moving is in investigating the nuances of what makes a video compelling, hilarious and real; what pulls you through a five minute video and what are the five W’s of captivating content.

We’ll be mocking up and prototyping some video content next week, stay tooned!